You have all been gathered here today for a very special reason. There is treachery afoot!

Just after having taken the world by storm with his hit single "Gangnam Style", the beloved Korean pop singer PSY was found dead in his vacation home. He was the victim of a gruesome murder. Local authorities found a message written in his blood scrawled across the wall next to his lifeless body:

There were no fingerprints found at the scene, but multiple sets of boot prints were found around the premises, presumably scouting entrances to the home. The Korean NPA has ascertained that even though one of the sets of prints was a close match to PSY's own moon boots, that this was undoubtedly not the work of a serial killer; a security camera at a nearby gas station distinctly observed two figures with obscured faces in an unmarked van (with a license plate holder reading 그 버튼남자들) driving towards the PSY estate at fourteen minutes before the time of death. The same van was observed driving recklessly away from the scene of the crime seventeen minutes after its first appearance.

There appeared to be signs of a struggle. The subject suffered multiple blunt force trauma attacks, had multiple lacerations, and several bullet wounds were apparent.

PSY, Beloved Prince of K-Pop has been murdered pre-game!

Your mission, should you choose to accept it, is to track down the bastards who did it! The prevailing rumors are that certain J-Pop stars became jealous of PSY's almost overnight success, and dispatched a pair of hit men to do their dirty work. Other rumors insist many different scenarios: that PSY forgot to pay off some Chinese triads who connected him with the right people for him to gain success; that certain Vietnamese gangs took offense to the mass commercialization of the word "Gangnam", as it bore too much resemblance to the "Gangs in 'Nam" moniker used for the annual violent crime expos which pre-dated PSY's use of the term in his song. The rest are even sillier than that, and don't bear mentioning.

The only thing that is for sure is that two of you need to be hunted down and brought to justice. And you only have a few days to accomplish this! 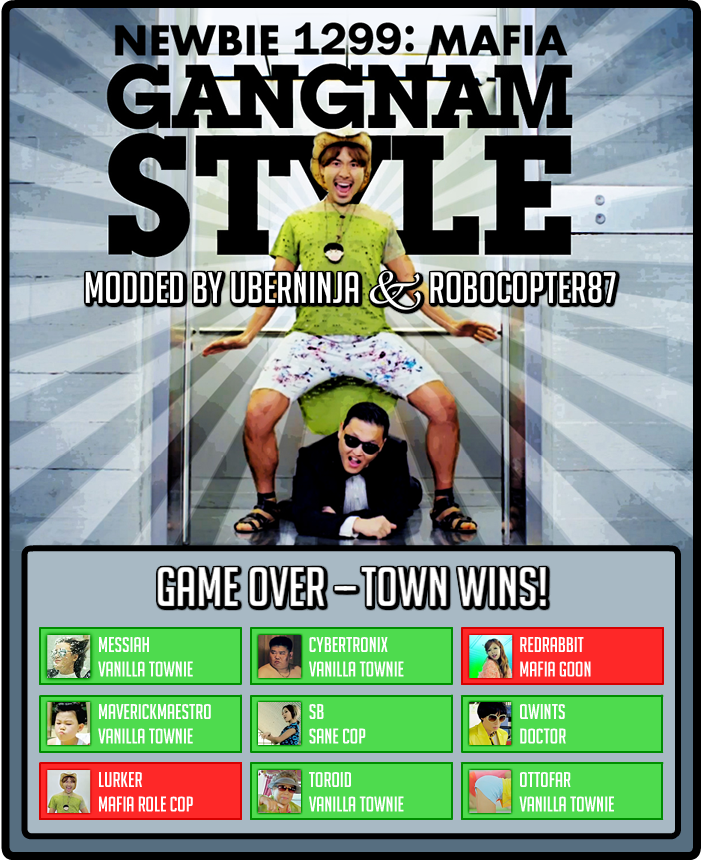 This game was pretty awesome. For the town, that is. They put one of the scum at L-1 within 6 pages on Day 1, and he hammered to deny town information. Then on Night 1, the Cop (SB), suspicious of someone who didn't vote, investigated the remaining scum partner. Day 2 dawned, and very quickly, the game was over. There is little to say, other than that PSY obviously has some very dedicated fans, who wouldn't rest until his murderers were brought to justice!

Quotes from this game