somestrangeflea's Gameshow Marathon is an annual event, in which MafiaScum players can take part in a tournament consisting of gameshows, some widely known, some not.

The first games to be played. Players are free to enter any game via an open sign up. Winners progress to a Semi-Final.

A game in which all the answers are numbers.

Players are assigned a number. Players answer 6 number-based questions. First correct answer for each goes through to Round 2. All incorrect answers are immediately eliminated. 6 players go through to the next round.

Players use their numbers from Round 1 to answer questions. The only possible answers are the players' numbers. Players answering incorrectly are eliminated. Also, if a player correctly answers with another player's number, that player is eliminated. Last player left wins.

The quiz show where you have lives. Three of them.

Players start with three lives, and are each asked one question in turn. Incorrect answers, or running out of time, cause players to lose a life. Once all players have been asked one question each, they are each asked another, the only difference being, that if a player has 2 lives left, then getting the second question incorrect causes them to lose both their remaining lives.

The final round is played for points. Players are given 1 point for each life remaining at this point, before being restored to three lives. The first questions are quickfire questions, whereby the first person to answer gets the 10 points for each. However, as soon as a player gets above 30 points, the game changes to "Question or Nominate?" If a player has control, they can choose to answer another question, still for 10 points each, or choose someone else to answer it. Players lose one life per incorrect answer. Like before, if the chosen player gets the question wrong, the chooser is again asked "Question or nominate?" Play continues until one player remains, who is declared the winner, or 40 questions are asked, in which case, the player with the most points is declared the winner.

The game where you get to knock people out of the game yourself.

Players can choose how much money they would like to start the game with, anything from $1 to $25000. Giving yourself more money will make the next round easier, but the person who gives themselves the most money is eliminated from the game.

Players are given part of a question, and must wager as much money as they like that they will know the answer to the full question. Whichever player wagers the most can answer. If they get it right, the wager is added to their total, if they are wrong, it is taken away. After five questions, the player in the lead chooses one of the other players to remove from the game. At the beginning of each set of questions, the players are given the amount of money that the leader has. Play continues until 2 players remain.

Players can choose whether or not to Share or Shaft. The outcome for each event is as follows:

The winnners of the Entry Rounds play each other in a 1 on 1 game. Winners progress to the final. 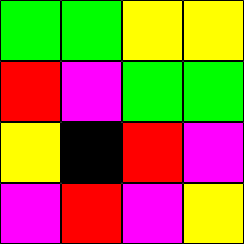 A simple game, in which players alternate choosing from a grid of 16 squares in an attempt to gain as much money as possible and win the round. Best of 3 wins. Players start with £1000. Squares can be:

Players also have 2 Reveals for each round, which can be used to privately see the color of a square, but not it's value.

Players will be told at the beginning of each game how many of each square are in the grid.

The classic letters and numbers game. Consists of:

Player with the most points wins.

Players choose 9 letters, by deciding whether they would like a consonant or vowel. Once 9 letters are chosen, the clock starts. When the time runs out, the player with the longer word wins 1 point per letter used, excepting 9 letter words, which are worth 18 points.

Two groups of numbers are used:

Players choose six numbers, by specifying how many from each group they would like. Players must use the 6 numbers to create a randomly determined 3 digit number. Players can only use addition, subtraction, multiplication and division, and can only use whole numbers (ie. no divisions which provide decimal answers). Whichever player is closest gains points depending on how close they were:

A nine-lettered anagram is revealed. Players must guess what the word is, but are only allowed one guess. If a player gets the word correct, they are awarded 10 points.

The winners of the Semi-Finals play each other to determine the winner of the 2007 Marathon. 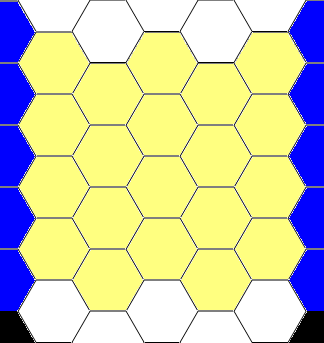 The classic quiz where we tell you the first letter of each answer.

The game is played on a grid of 20 interlocking hexagons, arranged in five columns of four. A random tile is chosen, and the players are asked a question, the answer of which begins with the letter found in the tile. Getting a question correct changes the tile to that player's color, and allows them to choose which tile is played for next. First player to create a path from left to right, or top to bottom, wins the round. Best of three wins. However, if the game needs a deciding third round, it is played on a smaller 4x4 grid.

The winner of the Final takes part in the Endgame, to determine how much they leave the Marathon with.

Deal or No Deal?

Players choose 1 of 26 cases to be "Their Case". The player then discovers what is inside their case by opening the other cases. The player can Deal at any of The Banker's offers, and the player wins that amount, rather than what was in their case. The number of cases opened between offers varies as the game continues, starting at 6 and decreasing by 1 each round until only 1 case is opened each round. The amounts of money in the cases are as follows: 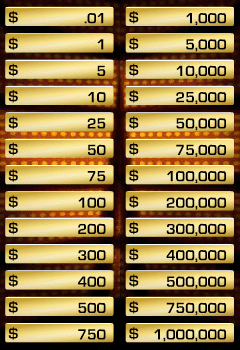